Cats are of different sizes. The wild cats are comparatively smaller than the home cats. Rusty Spotted Cat is one of the smallest cat species in the world. This cat breed is about half the size of a typical domestic cat. Rusty-spotted cats, scientific name Prionailurus rubiginosus, are endemic in Asian countries such as India, Pakistan, Bangladesh, and Sri Lanka.

You won’t find this cat frequently because of its smaller size as well as decreasing numbers. There are several interesting facts about the rusty-spotted cat.

Let us find some of the jaw-dropping facts:

2. Nickname is the Hummingbird

The nickname of the cat is ‘Hummingbird of the cat world’ because it’s cute and small. the cat is intelligent and can grow quickly as well as able to change direction in order to avoid predators in the wink of eyes. On the ground, the cat is very fast and comfortable, rather than the trees, or mountains.

3. It can breed with domestic cats

The cat can be hybridized with the home cat, which is another reason for its decline in the population. This is quite alarming for the future generation of the original cat breed.

Prionailurus rubiginosus, or rusty-spotted cat is treated as a rare breed. Because of its rarity, it is not commonly found worldwide.

They love to stay silent and hidden in the dense forest or arduous mountain. People can only see this in the zoo, not in the wild.

5. The smallest cat in Asia

According to research, this cat breed is the smallest cat in Asia, its birthplace. The largest cat of this kind is not more than 19 inches in size and 3.5 pounds in weight.

Therefore, the adult cat will easily fit on the palm of a human. They are great to look at aristocratic gravity.

The kittens grow up in the lp of the mother until they can live independently and can take care of them. Only the sexually mature cat is treated as an adult, like all other animals.

The habitat regions of the cat are called temperate, tropical, and terrestrial. The cats are endemic in Asian countries like India, Pakistan, Nepal, Bangladesh, and Sri Lanka, mostly.

There are two subspecies of rust-stained cats available. One species is found in Sri Lanka and the other one in India.

Sri Lanka is full of forest and the cat lives in the forest. In India, the cats are mostly available in scrubland as well as grassland.

The cats love the rocky mountain areas and don’t live to live in rain forests and vegetation. These cats aren’t so commonly found in the wild, there are few in the zoo

Since the breed lives, feed on and breed in the dense forest, or in the mountain cliff, there is no specific data about its population.

There are several causes for its distinction, such as destruction of habitat, deforestation, hunting, lack of food, and smuggling by the ill-motivated people.

The cat always keeps a distance between humans and any predators. The breed loves to stay calm, cool, and hidden.

Because of its shyness, this breed is not frequently visible. The cat hunts at night and loves to pray alone. Out of fear and safety, the cat may be arrogant and attack strangers.

This breed is a territorial animal and marks its territory by urinating around an area that they consider to be their own. This marking helps another cat about the existence of any other cat.

10. The kitten is blind at birth

At birth, the kitten does not have any eyes to look at. After 2 weeks of age, the kitten goes out of the natural blindness.

The kitten is too little to count, not more than a couple of ounces. The mother feeds the kittens until they don’t find food and eat on their own.

The cat is with catchy colors to attract anyone. They have very dark spots on the fur. With the changes of color by 2 months of birth, the cat slowly approaches maturity.

The largest part of the cats’ fur looks gray. The cat is with a darker scar on its back as well as on the face. The cat also has some spots in the abdomen, with white fur. 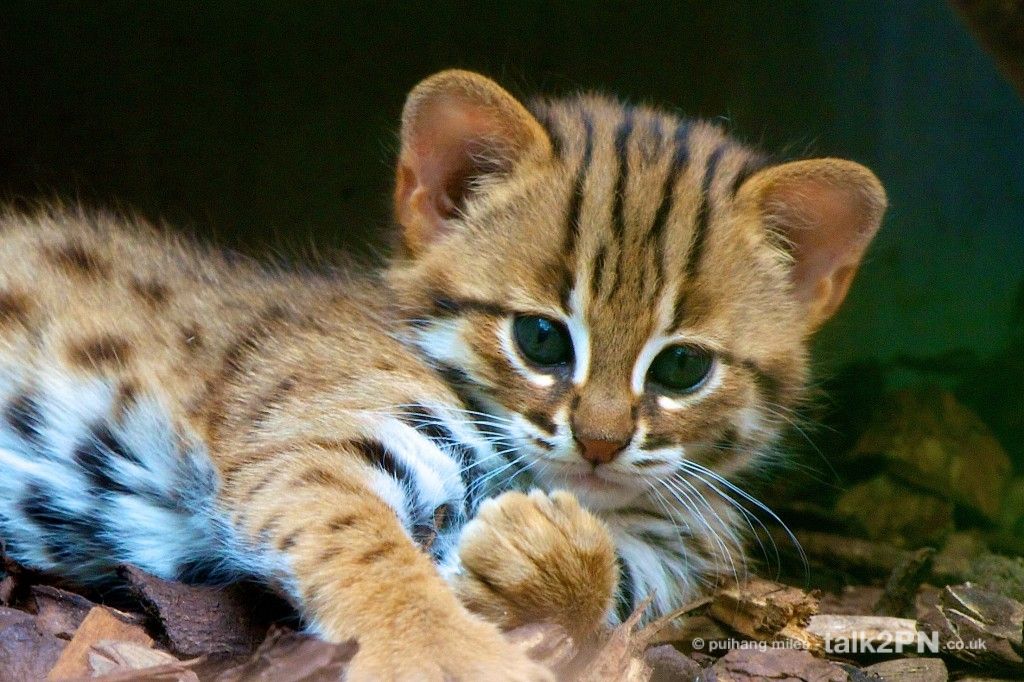 The number of cats is very low. Therefore, it’s not vastly available to put in the zoo, or in captive.

The captive cats form an amicable relationship with their keepers, and the curators are able to feed them and embrace them in their own hands.

In captivity, a cat may live up to 12 years, which is the one-third shorter length of life span in the wild.

The male is larger than the female. A full-grown female is weighed up to 1.4 kg whereas a full-grown male reaches up to 1.7 kg.

Interestingly, during the fist first hundred days of development, female kittens are bigger in size than males.

In some aboriginal areas, cats are hunt for their meat. Also, they are killed due to their attack in the household and damage livestock in the nearby locality.

The cats are a carnivore, which means they only prey and live on meat. Small mice are the main source of food, alongside frogs, reptiles, small lizards, birds, eggs, rodents, and mammals.

17. It is a nocturnal animal

The cats are nocturnal animals and will hunt for food at night. They usually take rest or sleep during the daytime in the forest, dense tree, or in the cave of the mountain.

It may also have some short activities in the day time. Being nocturnal has several benefits, to keep them safe from the predators, as well as to hunt silently, and easily when the prey is in sleep.

18. Female find a barren territory to give birth

The female finds an isolated territory for delivery when she is ready to have a kitten. This is the place when the female will have to stay for a couple of days.

The place is safer and private. After a couple of days after birth, the mother goes back to its usual territory.

The number of the cat breed is estimated not more than 10,000 in the wild.

The cat may live close to human society for a regular supply of food. They hunt livestock and poultry frequently.

21. People are their natural enemies

People hunt the cat for many reasons, for meat, skin, sale, as well as kill the cat as pest when the cat attacks poultry.

22. It spends most of its time on the ground

The cat mostly lives on the ground, not in the trees, or in the mountain cliffs. It is because most of the prey is on the ground. Also, there are many activities the cat needs to do by staying on the ground.

The cat species may be polygynous, which means, a male cat’s territory may overlap with several female territories. However, in general, the territories of two females or two males never overlap.

A territorial male is able to mate with all females in his own territory. This breed mates year-round. The gestation period of the breed lengths between 67 to 71 days.

The breed is a solitary animal, it leaves and hunts alone in forests or mountain.

The rusty-spotted cats Communicate through their body scent, where both males and females spray urine for scent-marking and attracting each other.

The cat lives up to 12 years in captivity, whereas 18 years in the wild.